“A bagel is a round bread made of simple, elegant ingredients: high-gluten flour, salt, water, yeast and malt. Its dough is boiled, then baked, and the result should be a rich caramel color; it should not be pale and blond. A bagel should weigh four ounces or less and should make a slight cracking sound when you bite into it instead of a whoosh. A bagel should be eaten warm and, ideally, should be no more than four or five hours old when consumed.

Sometimes New Yorkers can seem like snobs, proclaiming that there is no other city in which to live. Surbanites resent that the “capital of the world” presents itself as the leader in museums, theater, fashion and media.But trust New Yorkers on this: they truly make great bagels.

I’m not trying to be a snob. I grew up loving Noah’s and Lender’s bagels. Almost everyday in eighth grade, I went to my local Socal store, Just Bagels, where I delighted in the chocolate chip and blueberry bagels. That was before I knew better.

A bagel, contrary to popular belief, is not a doughnut-shaped roll. There should be a marked difference in texture between the crust and the interior. The crust should crack, not crinkle, when you bite into it. The insides should be chewy, elastic and moist. Its crumbs should not resemble sawdust.

A plain New York bagel is so good that it does not need to be toasted, buttered or cream cheesed.

This weekend, my friend Thom hosted an after-church brunch. It was really an excuse for me to make bagels. I normally wouldn’t make them for myself, since I don’t have enough room in my overstuffed freezer [3] to store the leftovers. I’m a huge fan of cooking and freezing, since it keeps food fresh and offers built-in portion control.

I used a recipe [4] from The Bread Baker’s Apprentice [5]. If you don’t live in New York, these are as close to an authentic bagel as you can get. Hot out of the oven, these are better plain than with any spread. It sounds like heresy, but Nutella detracts from the dough. 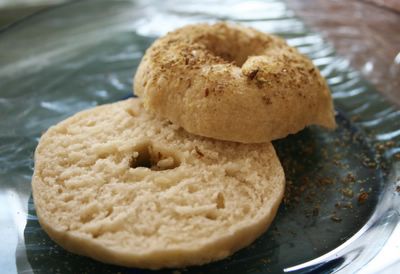 Basically you make a sponge out of high-protein flour, instant yeast and water. Let it sit for two hours, or until double. This extra step helps the dough develop more flavor. 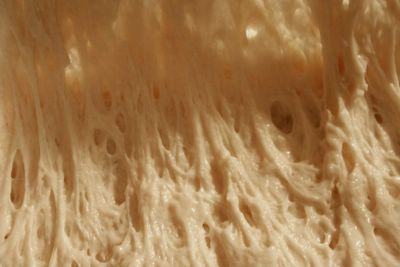 Then you add some more flour, sweetener (preferably barley malt) and salt. After some heavy kneading, you shape the dough and let it retard in the fridge overnight.

The next morning, you briefly boil the dough and sprinkle on toppings while it’s still wet. I used oatmeal, black sesame, flax seed, chopped almonds and white sesame. Into a blistering hot oven it goes. 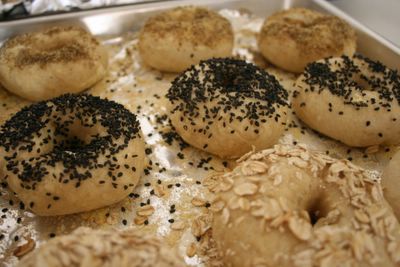 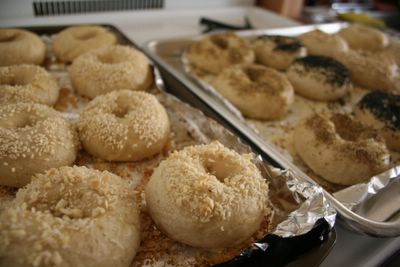 Notes/tips:
The bottoms developed a crunchy golden crust, thanks to the cornmeal-covered baking sheet. However, the tops did not brown, even though I cooked them for almost double the time. I suspect it’s because I put two sheets on the middle rack, thus preventing air circulation. Next time I’ll put the sheets on separate racks and alternate them halfway through baking. Don’t spoil your hard work by pulling out the bagels before they brown.

The texture of the interior was right on, and it tasted better than any grocery-store brand. However, the flavor wasn’t as complex as my favorite bagel, Murray’s Bagels [10]. I suspect it’s because the sponge didn’t have enough time to develop its flavor. Since I had active dry instead of instant yeast, I made some changes to the recipe. Active dry yeast does not dissolve as readily, so I mixed it with hot water rather than room temperature water, as the recipe instructed. I also added all the yeast to the sponge, since the second step didn’t involve any liquid. As a result, my sponge doubled in only an hour. To slow down the rise, I’d dissolve the yeast in cooler water. I’d also divide the yeast and dissolve the second addition in 1/4 cup water (reserved from the sponge).

High-gluten (14% protein) or bread (13% protein) flour is necessary to give the bagel its texture and structure. You can make your own bread flour by adding 2 tsp vital wheat gluten [11] to every cup of all-purpose flour.

Don’t be greedy with the toppings–every square inch doesn’t have to be covered. Any excess will fall off and be wasted, although sprinkling the extras over rice is tasty.

My dough was dimpled rather than smooth because it was difficult to knead by hand. The entire mass was as big as a basketball! And it only made 12 regular (or 24 mini) bagels. No wonder bagels have up to 400 calories, before the cream cheese! You’ll get better results if you use a stand mixer with a dough hook. But either way, the bagels are delicious.

Here’s how to spot an authentic bagel without even biting into it:

If you visit New York, be sure to stop by my two favorite shops: