The Amateur Gourmet [2], arguably the most humorous food blogger, celebrated his site’s second anniversary this Saturday at The City Bakery [3].

Ever since reading Adam Roberts’ “Condoleezza Rice Pudding with Berries of Mass Destruction [4]” entry, I fell in love with his writing. Since then, he’s been featured in the Sacramento Bee [5], Boston Globe [6] and even has a book [7] due out spring 2007.

I sweated up a storm while talking with Adam, but not because he’s intimidating in person. Actually, he was a gracious host, making sure to say “hi” to everyone, remember their names, and sharing a delicious tart that he now claims [8] I stole.

No no, everyone’s pores opened up wide because The City Bakery was like a sauna. Their ovens must be on all day, constantly churning out fresh desserts. 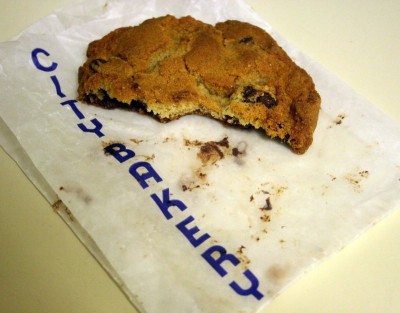 I finally tried their chocolate chip cookie, which was revered by New York magazine [10], NY Daily News [11], Words to Eat By [12], and The Wednesday Chef [13]. The cookie was still warm, with swirls of chocolate melting on my fingers and lips. There was a high crispy to chewy ratio; a thick brown crust and pale interior that suggested a high proportion of white to brown sugar (or maybe no brown sugar at all). The giant brown blob on the bottom left suggests that chocolate discs, in addition to chips, were used.

The City Bakery makes a great case for a crispy cookie. Usually, crispy means biscuity, like the Original Chips Ahoy cookies. Crispy at The City Bakery means buttery and crunchy. There was also an extra flavor to these cookies. Words to Eat By called it toffee-esque, but I think it tasted of almond paste.

It was a fun eating experience, but I honestly prefer my own [14]. Chocolate chip cookies are typically described as cakey, chewy and crispy, but there’s a fourth characteristic: soft. Soft and chewy are often used interchangeably, as they tend to occur together. However, the City Bakery’s cookie did not have a hint of softness. The chewy middle required a bit of a workout. My favorite chocolate chip cookies are soft, where one bite can sink your teeth all the way down to the bottom.

Adam’s autumn tart was the best tart I’ve ever tasted. Tart cranberries and caramel-covered almonds came together harmoniously in a crispy crust. Too often, tarts have thick, soggy crusts (from soaking up fruit juices over several days). Everything is fresh at The City Bakery, so there’s no need to compensate with brick-like crusts. The tart would have been even better if it was combined with Johnny Iuzzini’s pate sable recipe [16]. Yes, you can make City Bakery tarts using their book, The Book of Tarts [17]!

The chocolate tart was another winner, with its silky, dark chocolate custard. The crust was a little too much like shortbread than a chocolaty crust. Once again, I’d sub Iuzzini’s tart dough but add a little more sugar and some cocoa powder.

You want a meal? How about a thick slice of French toast with the syrup built in? The burnt edges were crispy, chewy and caramelized. The inside was very eggy, like a dense sponge. The whole thing was sweet, buttery and delicious.

Oh yeah, on to the people, the reason why I sampled these desserts in the first place! About 20 showed up, including but not limited to Molly (Orangette [20]) Gerald (Foodite [21]), Stacey (Just Braise [22]), Rebecca (who hosted the last NY food bloggers potluck [23]), Anne (of Houghton Mifflin), The Anonymous Lawyer [24], Lisa (the infamous vegetarian who has posted [25] while Adam was away) and Adam’s real-life friends. If I didn’t mention you, please say hi and remind me!

There was a pop quiz when Lisa asked me why American macaroons were made out of coconut and mine (which I brought along) were made of almonds. Off the top of my head, I explained that traditional French Italian macaroons were made with ground almonds and egg whites. When they came to the U.S., Jewish people substituted coconut and sweetened condensed milk. In short, macaroons are chewy cookies made with nut meat, lots of sugar and some type of binder. I felt unqualified to answer the question, as my macaroons have French ingredients, but they are domed and crackly like American macaroons. It’s something that I haven’t bothered fixing, because they taste so good anyway. Phew, everyone believed me, so I passed the test!

Now that I’ve talked to Adam in person, I know his dirty little secrets, like how he grossly exaggerates his blog. 🙂 He’s made Lisa out to be a mean, picky eater [30], but she was nice on Saturday! In Adam’s recap [8], he claims that I hogged his tart, but I had two pieces that were the size of my thumbnail. This was after he passed his tart around to everyone, and he still had half of it left when the party was over. Honest!

Buy the Book of Tarts: Form, Function, and Flavor at the City Bakery [31]