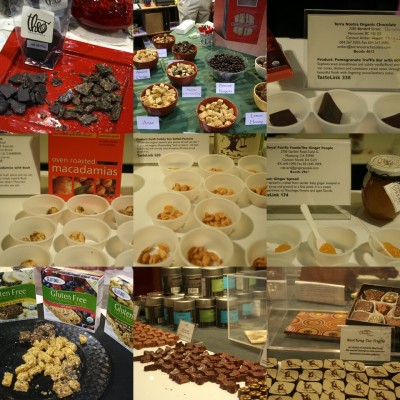 It’s that time of year again: the Fancy Food Show [2]! From July 8-10, more than 5,700 booths from 73 countries and regions populated New York. Established and fledgling companies hobnobbed with food service professionals and the media, hoping that their product would be distributed to the masses. It’s a preview of what’s to come to the supermarket shelves.

The natural food products were greatly improved. Last year, there were pseudo whole-grain products and stuff that tasted like medicine. This time around, there was lots of flax, peanuts in all forms (salt-blistered cocktail nuts and natural peanut butters), whole-grain crisps, creative oils, fruit-sweetened sodas and even gluten-free experimentation.

As for non-healthy foods, there were gourmet potato chips and sweet/salty/savory confections. I had some good peanut brittle with seafood seasoning. Long a practice in France, there were also several salted caramels. I think U.S. candy is actually pretty salty to hide the flaws. These candies, however, used salt deliberately and carefully.

On the chocolate front, there was a continuation of single-origin chocolates and cacao nibs. Nothing ground breaking, but there was fine tuning. I felt bad for chocolate giant Ghirardelli, who was proudly handing out 73% chocolate. Cacao percentage is so 2005; artisan makers are focusing on cacao quality rather than quantity.

I enjoyed going a second year in a row, because I developed a better strategy: eat a light meal beforehand (there’s enough food in the Javits Center to feed a village, but all that random stuff churning around in your stomach doesn’t feel good) and go to the Focused Exhibits first. Otherwise, you’ll get lost in the random food booths. Also, it was nice seeing the fruits of last year’s show. Whole Foods now carries Skotidakis [3] Greek yogurt and 34 Degrees [4] fruit pastes, two of my favorites from last year.

Let’s get on to my personal Best in Show, shall we? I had a hard time paring down my favorites, hence the super-specific categories. First, the chocolate. 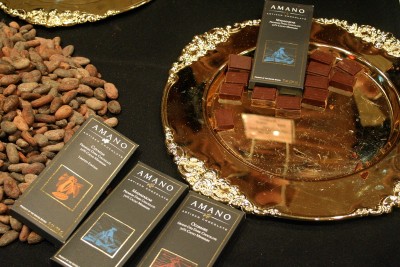 Amano [5] – At 4,441 feet above sea level in Orem, Utah, Art Pollard is one of the few remaining independent American chocolate makers (Hershey’s bought out Scharffen Berger and Dagoba a couple years ago). He doesn’t use emulsifiers like soy lecithin, which create smoothness but can interfere with flavor. He also swears by the mountaintop setting, saying it allows him to process the chocolate at a lower temperature and preserve more flavors. He only makes 70% chocolate, but they taste radically different because of the origin. The Ocumare from Venezuela tastes like berries, apricots and plums, while the Madagascar tastes like oranges. He also has a limited edition Cuyagua.

[6]Domori [7] from Italy also doesn’t use emulsifiers, and it’s a wonder how they get their chocolate so smooth and thick. Two of their 70% Venezuelan chocolates are also very different. (Which is why the percentage gives you limited information. Purists swear by the country of origin, and super-purists insist of single plantations.) The Rio Caribe Superior has notes of plum, apricot, peppercorns, coffee, milk, and sugar. If you think that’s a mouthful to say, wait till you taste it! The Caranero Superior, also from Venezuela, tastes like mocha, nut, raisins and dirt. 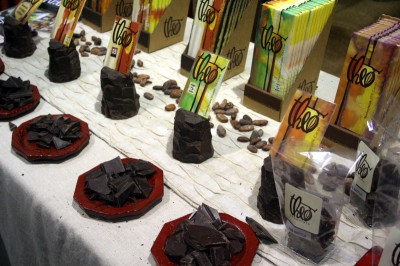 Theo [9] – Okay, so they don’t have competition because they’re the first roaster of Fair Trade Certifiedâ„¢ cocoa beans and the only roaster of organic cocoa beans in the U.S., but they’re darn good. My favorite is the nib brittle, which has nuanced chocolate bits encased in hard candy. Going along the salty-sweet trend, their Bread & Chocolate bar has toasted bread crumbs (it’s not so weird; they’re crunchy like nuts) and salt. I wanted to like this bar, but I found it too salty. They also have several single-origin chocolate bars and tasty truffles. The bars are a bit hard though. 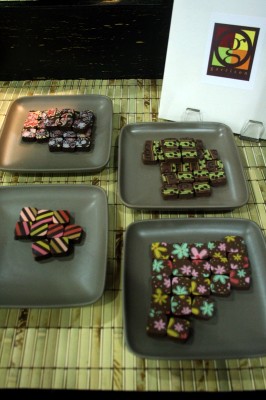 Garrison Confections [11] – Chocolatier Andrew Shotts was the executive pastry chef at the Russian Tea Room and helped formulated Guittard’s high-end couverture, E. Guittard. In 2001, he started his own chocolate company with seasonal truffles. His coffee truffle sang in my mouth. 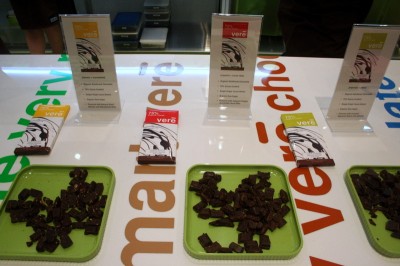 Vere [13] – This New York company only uses Ecuadorian cacao, which is naturally sweet. As such, Vere adds just a little sugar and some fiber to their chocolate. My favorite is the chocolate coconut cluster, and I don’t even like coconut that much. It’s wonderfully crunchy and paper thin. Although their chocolate is delicious, I wouldn’t shell out $2.50 for a truffle. No worries though, you can get generous free samples every Friday from 12:00-6:00 at their factory (12 W 27 St. between 6 Ave. and Broadway).

Most Creative Use of Chocolate 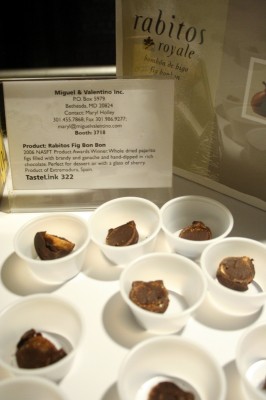 Rabitos Fig Bon Bon [15] – Imagine a truffle encased in a bulging dried fig and then covered in chocolate. Genius! These figs are Pajaritos, which only grow in the southern Spanish region of Extremadura.

Pralus [17] claims to be one of only three chocolate makers in France. I’m not sure what criteria he’s using, since Valrhona, Bernachon, Weiss and Michel Cluizel also make chocolate. No matter, each of his single-origin chocolates taste like a different color of the rainbow. They take a little getting used to, since they have sharp white cheddar and mushroom notes. The Madagascar chocolate-covered cocoa beans have that signature Pralus taste. His chocolate is hard to get in the U.S., so treat yourself if you can find it. 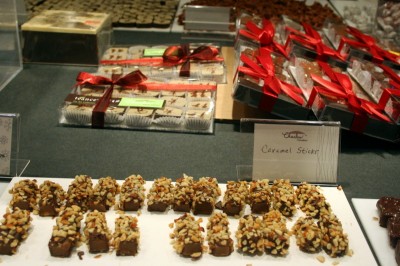 Charles Chocolates [19] from San Francisco makes fun things, like triple-coated chocolate nuts, tea truffles and peanut butter butterflies. They use a combination of Guittard and Cacao Barry chocolate, which are pretty neutral (no high notes of fruit or soil). I like my chocolate stronger, but this chocolate is nice if you don’t want to think too hard.

Coming up in part two: everything else.